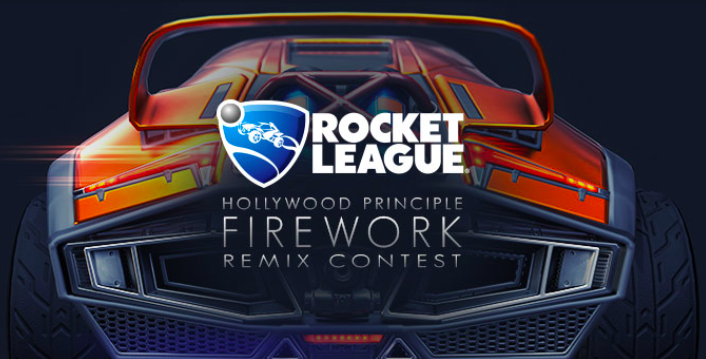 Summary
The video game development team at Psyonix and the critically-acclaimed electronic group Hollywood Principle, want to hear your remix of Hollywood Principle’s explosive song, “Firework” to be featured in an update of Rocket League. The winner will not only be featured in the game (which is played about one million times a day!), but will also be included in the trailer, and a popular Spotify playlist which has about 40 thousand followers. This is an awesome opportunity to show off your production and remixing skills – so go big because these stems are limitless.

THIS CONTEST IS A QUICK TURNAROUND – 3 WEEKS OF SUBMISSIONS!

SINCE THIS CONTEST IS TIME SENSITIVE, IT IS VITAL THAT YOU ARE REACHABLE NEAR THE TIME OF THE WINNERS ANNOUNCEMENT – PLEASE CHECK YOUR EMAILS

Winner or nominee of more than 150 “Game of the Year” awards, Rocket League® is one of the most critically-acclaimed sports games of a generation. Boasting a community of more than 23 million players, Rocket League® is a high-powered hybrid of arcade-style soccer and vehicular mayhem that offers easy-to-understand controls and fluid, physics-driven competition. Available digitally on Xbox One, PlayStation®4 computer entertainment system, and Windows PC, Mac, and SteamOS via Steam, Rocket League® includes more than 100 billion possible customization combinations, a fully-featured offline season mode, multiple game types, casual and competitive online matches, and special “Mutators” that let you change the rules entirely.

Formed in 2013 in San Diego, Hollywood Principle is an electronic trio comprised of Elliott Sencan, Kayla Hope, and Mike Ault. Their expertly crafted, modern sound is unique blend of haunting vocal melodies, indie electronica, and post dubstep influences. Hollywood Principle has quickly built up a following around their music, achieving over 20,000 fans on Facebook, more than 3000 Soundcloud followers, and two time Artist of the Month on Indaba Music. They also have been featured multiple times in the smash hit video game ‘Rocket League’!

Creative Brief
Hollywood Principle and Psyonix are looking for remixes of Hollywood Principle’s song “Firework”.
Psyonix and Hollywood Principle are looking for high energy tracks!
Prefer current sounding EDM (see other releases: Ether, Kevin Frey, Drunk Girl, TheFatRat)
The judges also prefer remixes that are fun, playful, and NOT explicit.
You must use at least one of the provided audio stems to be eligible.
Do not include any material that you do not have the legal right to exploit.
More votes will not make your submission more likely to win the Grand Prize.